Stop Shoulding and Just DO

Trust me when I say that I've allowed this little word “should” to hold me back from more opportunities than I want to admit. In fact it literally ran my life into the ground five years ago when I was just at a point where I could see the open sky and my wings were poised to flap into a sea of unimaginable possibilities.

But this was not to come. How could it when my life up to that point was built on one should after another: shoulds that were not mine, shoulds that kept me stuck in misery and suffering that I never wanted for myself, shoulds that were destroying my self worth, my sense of safety, my emotional and physical health to the point that I lost sight of who I was, what I was about, why I was here.

It's hard to build on a dream when it is based in fantasy, not reality? Consequently, when we go along with the shoulds imposed on us we're bound to feel miserable especially in an era when self actualization is possible.Trying to set out on a creative life course, or just any life course, you have to know what YOU want.

If you are confused about who you are, why you are here, what the purpose of life is, how to get from point A to B, and you can no longer make concrete decisions and are steadily sinking not flying, if your decisions are riddled with self-doubt, anxiety and procrastination, welcome to the academy of life! With a little self reflection and action you can start pointing your nose to the sky and dusting off those wings! 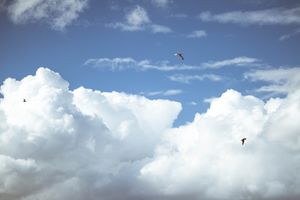 Often the loudest voice directing you (or not doing any directing at all) is the one that is not your own. It is someone else's voice, someone else's version of who you should be. The first step is becoming aware of whose voice(s) it is. This is often not pretty, in fact it can lead to a great deal of initial despair, even anger or rage, but at some point you have to take responsibility for yourself and meet the lost self that is buried often under a lot of trash. Once that trash is sorted (what's mine, what's not mine) you can begin to clear enough space to connect and build on the truth of you.

Many people get lost in this trash heap, but there is a way out, there is light. You keep sorting and digging until you can see a sliver of blue sky and then dig some more until you get out from under it! From there you begin by walking the true YOU road until you can run and eventually fly.

It took me many years to figure out that something was desperately wrong, then many more to figure out the whys of it all and then the how to's of getting out and back on a road that felt aligned with my true self. Now when I long for advise and direction, I realize that ultimately it's my choice to do things in a way that works best for me. I create my reality and the solid path that weaves thru it! I get to choose the fastest or shortest route, whether to take a straight path, a winding path, or a path less traveled. This is where true liberty lies.