Be Careful What You Wish For!

You know the old adage, " Be Careful What You Wish For"? Recently my son gifted me a string of lucky numbers to wish on. I've never been into Numerology, my "thing"  falls "sort of" more into the realm of Animal Guides despite the fact that I'm still a huge skeptic, but that's only because so many truly mysterious and otherwordly things have happened to me since childhood to ignore that something in this strange and wild world is definitely amiss!

So I ride on the fence of curiousity at a distance and just take things in stride, nothing too serious, nothing too light. And who wouldn't make a wish, if not just for pure fun, on a string of silly numbers?

That night, as I lay in bed I put my request out into the universal space, tentatively asking through cringed eyes that the negative cost not be too high. You know how it goes, right? Everything good must be balanced by the bad. No one gets a free ride, especially when you're selfishly asking! The giver doesn't ask what would be a fair exchange either.

As a bit of unease set in, I uttered the words that would unleash a torrent of consequences that would radically change the course of my life in the coming weeks and months.  The universe pounced in like a lion and swatted me thru a new door that would simultaneously spell one radical end and a new beginning that would leave me flailing around in no man's land for a a terrifying and indeterminable amount of time.

Be careful what you wish for, someone always told me. 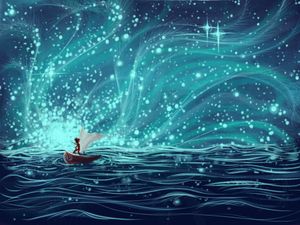 Luckily you can't die easily from a blow like that when it is balanced by the very gift you wished for! Good versus bad. The war was on and the good stuff poured in while the less than good stuff clawed at my back. I celebrated through laughter on one hand and lamented through tears on the other. My friends were probably genuinely concerned that I had finally cracked!

What on earth does one do with all this?

I carefully weighed in, trying to make sense of it all, while surrendering to the madness, cause at that point there was nothing left to do. I was flat on my back in a foreign vessel, far from shore, and looking up into the starry blue yonder with no paddles on board. "What now?" was the burning question tearing apart my gut that was now wracked with serious ulcerous pain!

Note to self: When one door opens, get the hell out of the way of the one that will inevitably slam you in the back!

Luckily, I had an army of friends this time waiting on the other side to pick me up and swiftly set me back on my feet. A small loving push in a direction helps, even if it's not quite the right one. Start rowing anyway, even if it's with your bare hands! The shore is out there and a mysterious new world awaits.

The first time this happened five years prior, the door caused considerably more damage. This one really hurt, but it was familiar and not quite so painful! As I've discovered (too many times, imho), pain creates a sort of resilience that can go a long way in helping us figure out what fits, what works best for us, what we desire most, where we want to go, and where we want to be in X amount of time. And sometimes, even then, the universe just decides for us.  This time the recovery was much faster! I figured out much quicker that the trick was to keep moving with my eye on the prize I had wished for in the first place while moving through the inevitable discomfort of negative balance. I had to hope that the consequences tied to others would work in their favor as well.

But that is the thing, we are never alone in the decisions we make. We are all tiny parts of a whole. Small cogs in a wheel that keeps grinding away forging new pathways and we all have to decide where we are going while inevitably bumping up against one another. I may put wishes on the back burner for awhile and just let life take me where it wants to. But what of other's wishes? How do those affect the rest of us? Action begets reaction. It's never really as simple as making a wish that we hope comes true.

So remember this: We are not singular organisms playing out our lives without seriously and sometimes irreparably affecting (and possibly damaging) the greater whole. When you make a wish, certainly make it count and make it smart!